Shares of Albertsons Companies, Inc. (NYSE:ACI – Get Rating) have received an average recommendation of “Hold” from the thirteen research firms that are presently covering the firm, MarketBeat reports. Eight analysts have rated the stock with a hold recommendation and one has issued a buy recommendation on the company. The average 12 month price objective among analysts that have updated their coverage on the stock in the last year is $29.48.

The business also recently announced a quarterly dividend, which was paid on Monday, November 14th. Stockholders of record on Monday, October 31st were given a dividend of $0.12 per share. The ex-dividend date of this dividend was Friday, October 28th. This represents a $0.48 dividend on an annualized basis and a dividend yield of 2.35%. Albertsons Companies’s payout ratio is 16.22%.

In other news, insider Realty Corp Kimco sold 11,500,000 shares of the business’s stock in a transaction on Friday, October 14th. The stock was sold at an average price of $26.18, for a total transaction of $301,070,000.00. Following the completion of the transaction, the insider now owns 28,338,105 shares of the company’s stock, valued at approximately $741,891,588.90. The transaction was disclosed in a legal filing with the Securities & Exchange Commission, which is available through this link. Corporate insiders own 1.10% of the company’s stock.

Albertsons Companies, Inc, through its subsidiaries, engages in the operation of food and drug stores in the United States. The company's food and drug retail stores offer grocery products, general merchandise, health and beauty care products, pharmacy, fuel, and other items and services. It also manufactures and processes food products for sale in stores. 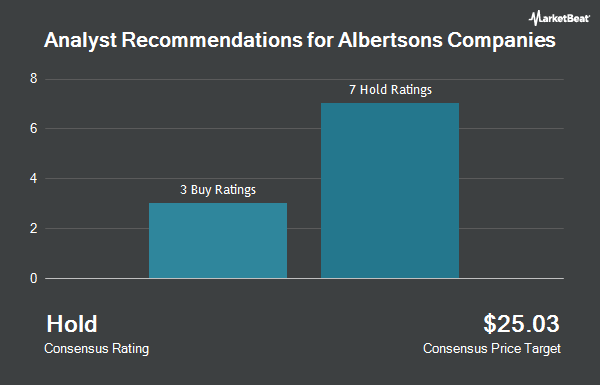 Complete the form below to receive the latest headlines and analysts' recommendations for Albertsons Companies with our free daily email newsletter: