Moelis & Company (NYSE:MC – Get Rating) was downgraded by equities researchers at UBS Group from a “neutral” rating to a “sell” rating in a research note issued to investors on Friday, The Fly reports.

A number of other research analysts have also issued reports on the stock. Wolfe Research lowered shares of Moelis & Company from a “peer perform” rating to an “underperform” rating and set a $42.00 price target on the stock. in a research note on Monday, July 11th. Piper Sandler lowered their target price on shares of Moelis & Company from $50.00 to $45.00 and set a “neutral” rating on the stock in a research report on Friday, July 8th. Finally, Morgan Stanley lowered shares of Moelis & Company from an “equal weight” rating to an “underweight” rating and lowered their target price for the stock from $53.00 to $36.00 in a research report on Monday, July 18th. Three research analysts have rated the stock with a sell rating and four have given a hold rating to the company’s stock. According to data from MarketBeat.com, the stock has an average rating of “Hold” and a consensus target price of $44.67.

Moelis & Company (NYSE:MC – Get Rating) last announced its quarterly earnings results on Wednesday, July 27th. The asset manager reported $0.57 earnings per share for the quarter, beating analysts’ consensus estimates of $0.41 by $0.16. Moelis & Company had a net margin of 22.19% and a return on equity of 76.91%. The firm had revenue of $242.52 million during the quarter, compared to analysts’ expectations of $199.79 million. During the same period in the previous year, the company earned $1.19 earnings per share. Moelis & Company’s quarterly revenue was down 32.8% compared to the same quarter last year. As a group, equities analysts expect that Moelis & Company will post 2.75 EPS for the current fiscal year. 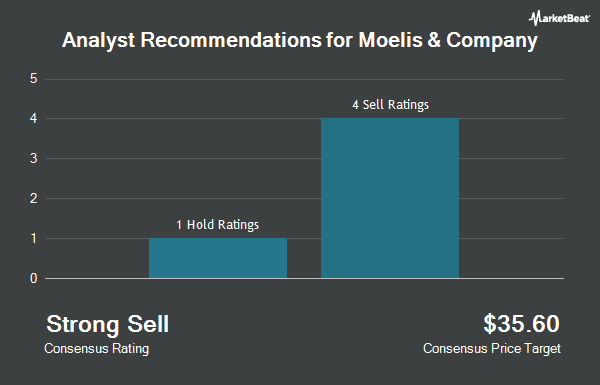 Complete the form below to receive the latest headlines and analysts' recommendations for Moelis & Company with our free daily email newsletter: