Twitter, Inc. (NYSE:TWTR – Get Rating) has been given an average recommendation of “Hold” by the thirty-six research firms that are currently covering the firm, MarketBeat reports. Three analysts have rated the stock with a sell recommendation, twenty-five have assigned a hold recommendation and four have given a buy recommendation to the company. The average 1 year target price among analysts that have issued ratings on the stock in the last year is $43.50.

Twitter (NYSE:TWTR – Get Rating) last issued its quarterly earnings results on Friday, July 22nd. The social networking company reported ($0.37) earnings per share for the quarter, missing analysts’ consensus estimates of ($0.06) by ($0.31). Twitter had a negative net margin of 2.14% and a negative return on equity of 0.82%. The business had revenue of $1.18 billion during the quarter, compared to analyst estimates of $1.34 billion. During the same period in the previous year, the company posted $0.04 earnings per share. Twitter’s revenue was down 1.2% compared to the same quarter last year. On average, sell-side analysts anticipate that Twitter will post 0.29 earnings per share for the current fiscal year.

Twitter, Inc operates as a platform for public self-expression and conversation in real-time. The company's primary product is Twitter, a platform that allows users to consume, create, distribute, and discover content. It also provides promoted products that enable advertisers to promote brands, products, and services, as well as enable advertisers to target an audience based on various factors, including who an account follows and actions taken on its platform, such as Tweets created and engagement with Tweets. 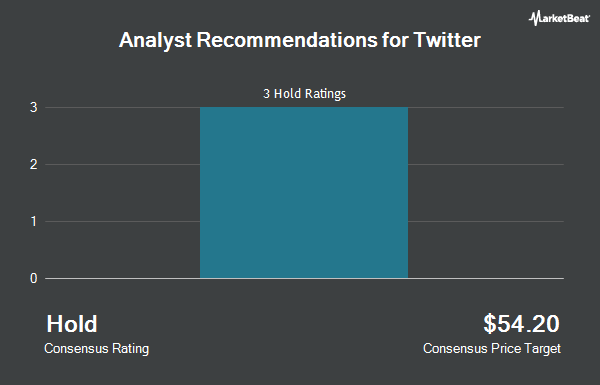 Receive News & Ratings for Twitter Daily - Enter your email address below to receive a concise daily summary of the latest news and analysts' ratings for Twitter and related companies with MarketBeat.com's FREE daily email newsletter.

Complete the form below to receive the latest headlines and analysts' recommendations for Twitter with our free daily email newsletter: