Prelude Capital Management LLC increased its position in shares of Franchise Group, Inc. (NASDAQ:FRG – Get Rating) by 25.6% in the 1st quarter, according to the company in its most recent 13F filing with the Securities & Exchange Commission. The institutional investor owned 78,757 shares of the company’s stock after acquiring an additional 16,071 shares during the quarter. Prelude Capital Management LLC owned about 0.20% of Franchise Group worth $3,263,000 as of its most recent SEC filing.

Franchise Group (NASDAQ:FRG – Get Rating) last released its quarterly earnings data on Thursday, August 4th. The company reported $1.19 earnings per share for the quarter, missing analysts’ consensus estimates of $1.23 by ($0.04). The business had revenue of $1.09 billion during the quarter, compared to analyst estimates of $1.14 billion. Franchise Group had a return on equity of 23.71% and a net margin of 9.11%. The firm’s revenue was up 26.8% compared to the same quarter last year. During the same quarter in the previous year, the company earned $1.16 EPS. As a group, equities research analysts anticipate that Franchise Group, Inc. will post 4.02 EPS for the current year.

The firm also recently disclosed a quarterly dividend, which will be paid on Friday, October 14th. Stockholders of record on Friday, September 30th will be paid a $0.625 dividend. The ex-dividend date is Thursday, September 29th. This represents a $2.50 dividend on an annualized basis and a dividend yield of 6.81%. Franchise Group’s payout ratio is currently 28.80%. 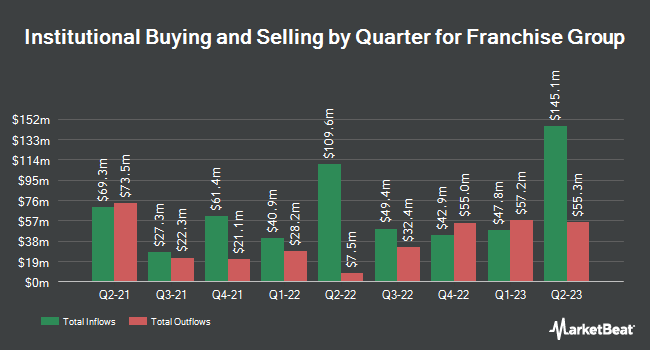 Complete the form below to receive the latest headlines and analysts' recommendations for Franchise Group with our free daily email newsletter: