J. Goldman & Co LP lifted its holdings in shares of Rafael Holdings, Inc. (NYSE:RFL – Get Rating) by 14.3% in the first quarter, according to its most recent disclosure with the Securities and Exchange Commission. The fund owned 783,156 shares of the company’s stock after acquiring an additional 97,700 shares during the quarter. J. Goldman & Co LP owned 3.76% of Rafael worth $1,966,000 at the end of the most recent quarter.

In related news, Chairman Howard S. Jonas purchased 3,225,806 shares of the business’s stock in a transaction dated Wednesday, July 6th. The stock was purchased at an average cost of $1.86 per share, with a total value of $5,999,999.16. Following the completion of the acquisition, the chairman now directly owns 3,338,367 shares of the company’s stock, valued at $6,209,362.62. The purchase was disclosed in a document filed with the SEC, which is accessible through this hyperlink. Corporate insiders own 7.90% of the company’s stock.

Rafael (NYSE:RFL – Get Rating) last announced its quarterly earnings data on Tuesday, June 14th. The company reported ($0.28) earnings per share for the quarter. Rafael had a negative net margin of 3,757.51% and a negative return on equity of 63.38%. The firm had revenue of $0.88 million for the quarter.

Rafael Holdings, Inc holds interests in clinical and early stage pharmaceutical companies, and commercial real estate assets in the United States and Israel. The company operates in two segments, Pharmaceuticals and Real Estate. It engages in the leasing of a commercial office building, as well as an associated 800-car public garage; and development and commercialization of therapies that exploit the metabolic differences between normal cells and cancer cells.

Want to see what other hedge funds are holding RFL? Visit HoldingsChannel.com to get the latest 13F filings and insider trades for Rafael Holdings, Inc. (NYSE:RFL – Get Rating). 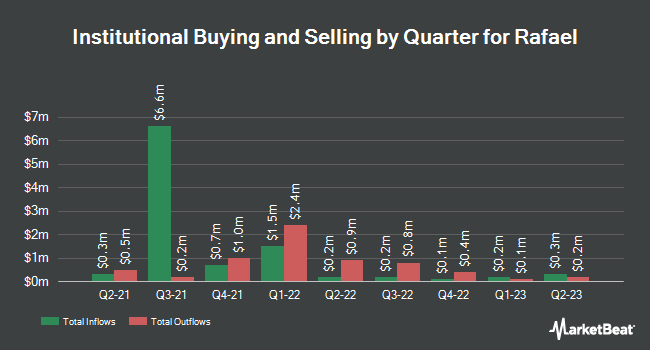 Receive News & Ratings for Rafael Daily - Enter your email address below to receive a concise daily summary of the latest news and analysts' ratings for Rafael and related companies with MarketBeat.com's FREE daily email newsletter.

Complete the form below to receive the latest headlines and analysts' recommendations for Rafael with our free daily email newsletter: