Skillsoft (NASDAQ:SKIL – Get Rating) had its price objective reduced by DA Davidson from $7.00 to $3.00 in a report released on Thursday morning, The Fly reports.

Skillsoft (NASDAQ:SKIL – Get Rating) last released its earnings results on Wednesday, June 8th. The company reported ($0.21) EPS for the quarter, meeting the consensus estimate of ($0.21). Skillsoft had a negative net margin of 27.77% and a negative return on equity of 3.80%. The firm had revenue of $170.25 million for the quarter, compared to analyst estimates of $167.68 million. Analysts forecast that Skillsoft will post -0.64 EPS for the current year.

In other Skillsoft news, CFO Gary W. Ferrera bought 30,000 shares of Skillsoft stock in a transaction on Tuesday, June 28th. The shares were purchased at an average cost of $3.61 per share, with a total value of $108,300.00. Following the acquisition, the chief financial officer now directly owns 30,000 shares of the company’s stock, valued at approximately $108,300. The acquisition was disclosed in a document filed with the SEC, which can be accessed through this hyperlink.

Institutional Investors Weigh In On Skillsoft

Skillsoft Corp. provides corporate digital learning services in the United States and internationally. The company operates through Content, Global Knowledge, and SumTotal segments. It offers enterprise learning solutions to prepare organizations for the future of work, as well as enable them to overcome critical skill gaps, drive demonstrable behavior-change, and unlock the potential in their greatest assets. 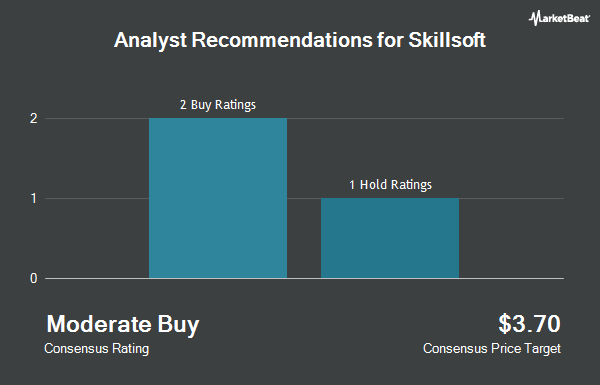 Complete the form below to receive the latest headlines and analysts' recommendations for Skillsoft with our free daily email newsletter: