TOD’S (OTCMKTS:TODGF – Get Rating) was upgraded by research analysts at Barclays from an “underweight” rating to an “equal weight” rating in a research report issued to clients and investors on Friday, The Fly reports.

Several other equities research analysts also recently commented on TODGF. UBS Group raised TOD’S from a “sell” rating to a “neutral” rating in a report on Thursday, August 4th. Morgan Stanley reduced their target price on TOD’S from €42.00 ($42.86) to €38.00 ($38.78) and set an “underweight” rating for the company in a report on Thursday, May 12th. Finally, Jefferies Financial Group raised TOD’S from an “underperform” rating to a “hold” rating in a report on Thursday, August 4th. One research analyst has rated the stock with a sell rating and five have assigned a hold rating to the stock. Based on data from MarketBeat.com, TOD’S currently has an average rating of “Hold” and an average target price of $33.00.

TOD'S S.p.A., together with its subsidiaries, creates, produces, and distributes shoes, leather goods and accessories, and apparel in Italy, rest of Europe, the Americas, Greater China, and internationally. The company distributes its products through directly operated single-brand stores (DOS), online, franchised stores, and independent multi-brand stores under the TOD'S, HOGAN, FAY, and ROGER VIVIER brands. 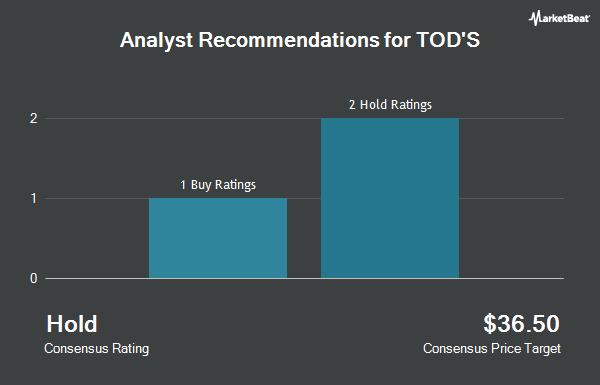 Receive News & Ratings for TOD'S Daily - Enter your email address below to receive a concise daily summary of the latest news and analysts' ratings for TOD'S and related companies with MarketBeat.com's FREE daily email newsletter.

Complete the form below to receive the latest headlines and analysts' recommendations for TOD'S with our free daily email newsletter: