JPMorgan Chase & Co. increased its holdings in shares of Huntington Ingalls Industries, Inc. (NYSE:HII – Get Rating) by 65.6% during the 1st quarter, according to its most recent Form 13F filing with the Securities and Exchange Commission. The firm owned 147,542 shares of the aerospace company’s stock after buying an additional 58,461 shares during the quarter. JPMorgan Chase & Co. owned about 0.37% of Huntington Ingalls Industries worth $29,426,000 as of its most recent filing with the Securities and Exchange Commission.

Several brokerages have commented on HII. Sanford C. Bernstein upped their price target on Huntington Ingalls Industries from $217.00 to $235.00 in a research note on Tuesday, August 9th. StockNews.com upgraded Huntington Ingalls Industries from a “hold” rating to a “buy” rating in a research note on Friday, July 29th. Three investment analysts have rated the stock with a hold rating and five have issued a buy rating to the company. According to MarketBeat.com, the company has an average rating of “Moderate Buy” and an average price target of $235.88.

In related news, VP Jennifer R. Boykin sold 2,614 shares of the stock in a transaction dated Saturday, June 11th. The stock was sold at an average price of $229.00, for a total value of $598,606.00. Following the completion of the transaction, the vice president now owns 7,447 shares of the company’s stock, valued at $1,705,363. The sale was disclosed in a document filed with the Securities & Exchange Commission, which is available at the SEC website. 2.16% of the stock is currently owned by company insiders.

The firm also recently declared a quarterly dividend, which will be paid on Friday, September 9th. Investors of record on Friday, August 26th will be issued a $1.18 dividend. This represents a $4.72 dividend on an annualized basis and a yield of 2.08%. The ex-dividend date of this dividend is Thursday, August 25th. Huntington Ingalls Industries’s dividend payout ratio is currently 32.37%. 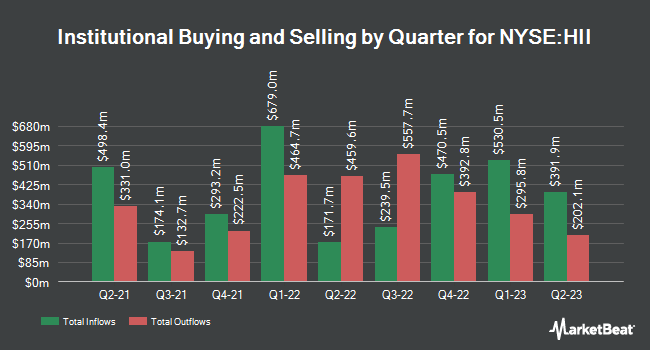 Complete the form below to receive the latest headlines and analysts' recommendations for Huntington Ingalls Industries with our free daily email newsletter: