JetBlue Airways (NASDAQ:JBLU – Get Rating) had its price objective lowered by Deutsche Bank Aktiengesellschaft from $16.00 to $10.00 in a research note issued to investors on Wednesday morning, The Fly reports.

JetBlue Airways (NASDAQ:JBLU – Get Rating) last issued its quarterly earnings results on Tuesday, August 2nd. The transportation company reported ($0.47) EPS for the quarter, missing the consensus estimate of ($0.11) by ($0.36). The firm had revenue of $2.45 billion during the quarter, compared to analysts’ expectations of $2.46 billion. JetBlue Airways had a negative net margin of 5.53% and a negative return on equity of 14.85%. The firm’s revenue was up 63.1% compared to the same quarter last year. During the same quarter last year, the company posted ($0.64) EPS. Research analysts forecast that JetBlue Airways will post -0.78 EPS for the current fiscal year.

JetBlue Airways Corporation provides air passenger transportation services. As of December 31, 2021, the company operated a fleet of 63 Airbus A321 aircraft, 8 Airbus A220 aircraft, 21 Airbus A321neo aircraft, 130 Airbus A320 aircraft, and 60 Embraer E190 aircraft. It also served 107 destinations in the 31 states in the United States, the District of Columbia, the Commonwealth of Puerto Rico, the U.S. 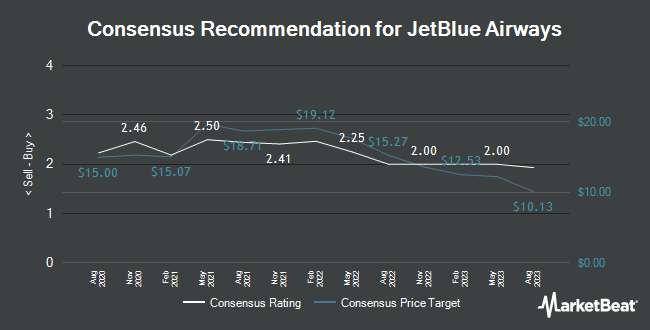 Complete the form below to receive the latest headlines and analysts' recommendations for JetBlue Airways with our free daily email newsletter: