Freshpet (NASDAQ:FRPT – Get Rating) will post its quarterly earnings results after the market closes on Monday, August 8th. Analysts expect Freshpet to post earnings of ($0.14) per share for the quarter. Individual that are interested in participating in the company’s earnings conference call can do so using this link.

In related news, EVP Stephen Weise sold 8,000 shares of the business’s stock in a transaction dated Friday, May 27th. The stock was sold at an average price of $68.00, for a total value of $544,000.00. The transaction was disclosed in a filing with the SEC, which is available through this link. 5.80% of the stock is owned by company insiders.

Institutional Investors Weigh In On Freshpet

Freshpet, Inc manufactures and markets natural fresh meals and treats for dogs and cats in the United States, Canada, and Europe. The company sells its products under the Freshpet brand; and Dognation and Dog Joy labels through various classes of retail, including grocery, mass, club, pet specialty, and natural, as well as online. 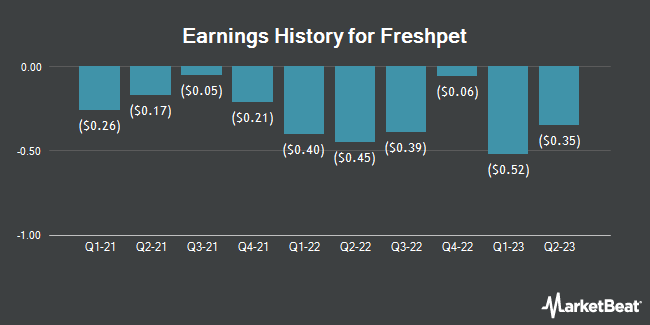 Receive News & Ratings for Freshpet Daily - Enter your email address below to receive a concise daily summary of the latest news and analysts' ratings for Freshpet and related companies with MarketBeat.com's FREE daily email newsletter.

Complete the form below to receive the latest headlines and analysts' recommendations for Freshpet with our free daily email newsletter: