DISH Network (NASDAQ:DISH – Get Rating) last posted its quarterly earnings data on Friday, May 6th. The company reported $0.68 earnings per share for the quarter, missing the consensus estimate of $0.69 by ($0.01). The firm had revenue of $4.33 billion for the quarter, compared to the consensus estimate of $4.39 billion. DISH Network had a net margin of 11.84% and a return on equity of 13.11%. The business’s revenue was down 3.8% compared to the same quarter last year. During the same period in the previous year, the firm posted $0.99 earnings per share. As a group, analysts expect that DISH Network will post 2.54 earnings per share for the current fiscal year.

In other DISH Network news, Director James Defranco acquired 400,000 shares of the stock in a transaction that occurred on Thursday, May 12th. The shares were acquired at an average cost of $19.27 per share, with a total value of $7,708,000.00. Following the transaction, the director now owns 1,661,428 shares of the company’s stock, valued at approximately $32,015,717.56. The transaction was disclosed in a filing with the Securities & Exchange Commission, which is accessible through this link. 53.30% of the stock is currently owned by insiders.

DISH Network Corporation, together with its subsidiaries, provides pay-TV services in the United States. The company operates in two segments, Pay-TV and Wireless. It offers video services under the DISH TV brand; and programming packages that include programming through national broadcast networks, local broadcast networks, and national and regional cable networks, as well as regional and specialty sports channels, premium movie channels, and Latino and international programming packages. 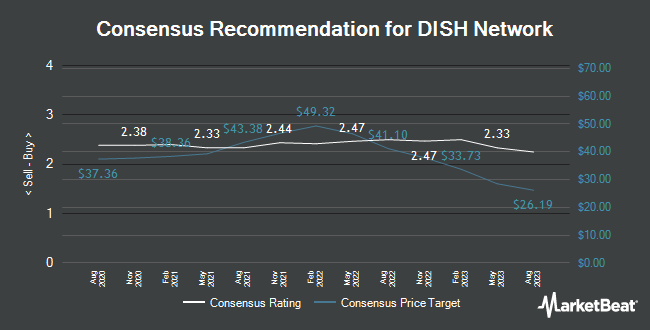 ZEAL Network Given a €49.00 Price Target by Hauck Aufhäuser In… Analysts

Complete the form below to receive the latest headlines and analysts' recommendations for DISH Network with our free daily email newsletter: