Kennametal (NYSE:KMT – Get Rating) had its target price cut by Barclays from $26.00 to $25.00 in a research report released on Wednesday, The Fly reports.

Kennametal (NYSE:KMT – Get Rating) last released its earnings results on Monday, August 1st. The industrial products company reported $0.53 earnings per share for the quarter, topping the consensus estimate of $0.46 by $0.07. The company had revenue of $530.02 million during the quarter, compared to the consensus estimate of $516.09 million. Kennametal had a net margin of 7.19% and a return on equity of 11.10%. The company’s revenue was up 2.7% on a year-over-year basis. During the same quarter in the previous year, the firm earned $0.53 EPS. Equities analysts expect that Kennametal will post 1.96 EPS for the current fiscal year.

Kennametal Inc develops and applies tungsten carbides, ceramics, and super-hard materials and solutions for use in metal cutting and extreme wear applications to enable customers work against corrosion and high temperatures conditions worldwide. It operates through two segments, Metal Cutting and Infrastructure. 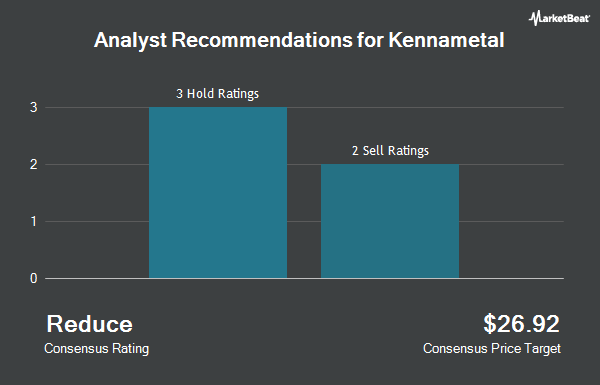 Complete the form below to receive the latest headlines and analysts' recommendations for Kennametal with our free daily email newsletter: