American Well Co. (NYSE:AMWL – Get Rating) COO Kurt Knight sold 5,577 shares of the company’s stock in a transaction dated Monday, August 1st. The stock was sold at an average price of $4.03, for a total transaction of $22,475.31. Following the completion of the sale, the chief operating officer now directly owns 1,497,652 shares in the company, valued at $6,035,537.56. The transaction was disclosed in a filing with the SEC, which is available through the SEC website.

American Well (NYSE:AMWL – Get Rating) last posted its earnings results on Thursday, August 4th. The company reported ($0.25) earnings per share (EPS) for the quarter, beating the consensus estimate of ($0.26) by $0.01. The business had revenue of $64.52 million for the quarter, compared to analysts’ expectations of $64.13 million. American Well had a negative net margin of 90.47% and a negative return on equity of 19.00%. The business’s revenue for the quarter was up 7.1% compared to the same quarter last year. During the same quarter in the prior year, the business earned ($0.15) EPS. On average, sell-side analysts predict that American Well Co. will post -0.98 earnings per share for the current fiscal year.

Several analysts recently commented on AMWL shares. Piper Sandler increased their price objective on shares of American Well from $5.00 to $6.00 and gave the company an “overweight” rating in a research report on Thursday, June 23rd. Guggenheim started coverage on shares of American Well in a research report on Wednesday, April 13th. They set a “buy” rating and a $6.00 price objective on the stock. Four investment analysts have rated the stock with a hold rating and five have issued a buy rating to the company’s stock. According to data from MarketBeat.com, American Well currently has an average rating of “Moderate Buy” and an average price target of $9.00. 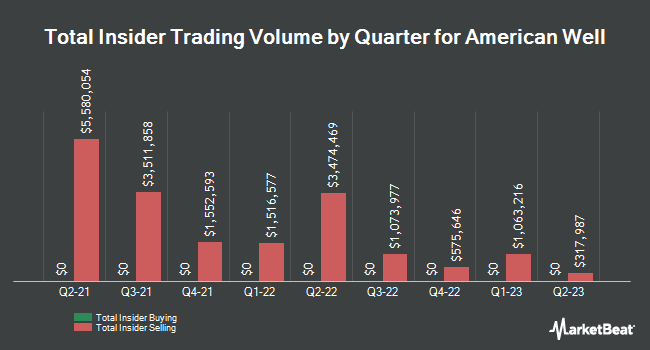 Complete the form below to receive the latest headlines and analysts' recommendations for American Well with our free daily email newsletter: